Poetry In Voice
I was very fortunate to be able to compete in “Poetry In Voice”, which is a national poetry recitation competition for high school students across Canada.  It is sponsored by Scott Griffin, the founder of the Griffin Poetry Prize.  In the year I competed, there were over thirty thousand high school students, from more than three hundred schools across the country.  In the end I came in first place in Canada!
Here are videos of two of the poems that I recited at the finals.  The first one, “Dog Boy” is by Matthew Rohrer and is a humourous poem about strange goings on in Oklahoma and Pittsburgh.  The next one, “Wolf Lake” is by Elizabeth Bachinsky, and is a dark and chilling story about a girl who comes home for the summer, and comes to a bad end.

I like to play trombone, and will get in a little bit of big band from time to time.  For the last few summers I have done the VSO Jazz workshops, singing and working with combos,  and playing big band trombone at Pyatt Hall.  It gives me a chance to get in some practice and have a lot of fun at the same time.

My jazz albums of songs that I play while busking

Songs from Matilda - this is an album of my original songs 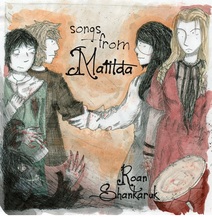 This is my album, songs From Matilda", which I recorded as part of my CBC "On The Coast Best Singer/Songwriter In the Lower Mainland" competition prize package.
I recorded "The Compromise" and "White Tablecloths" with Jon Siddall of CBC, at CBC Studio One.  Another of the songs, "O Sinking Ship" I worked on with Veda Hille, and recorded it at the Hive Creative Labs .
It's a bit more of an EP, with just eight songs on it - four with vocals, and four instrumentals.  They are all piano songs (one with violin), as it was burned before I started playing ukulele.  Just click on the album cover to go to SoundCloud, to hear my songs from this album, along with a couple of more recent compositions .

(Previous to this, I had been part of the Children's chorus in Carmen, in an earlier production.)  As the VO's version is based upon West Coast influences, I am the one in the blue body suit, with a bald head, and an ermine skin tied around my forehead.  Not the costume that I had hoped for, but it was still a really great experience!
Payments?
You can use the "Buy Now" button to pay via credit card or PayPal.